Do you know what’s living in the Rappahannock?

There are many species that don’t naturally appear in specific environments, but are rather introduced to them by human activities. These are referred to as invasive species. These can include plants, animals,  insects, shellfish, and many other living things. 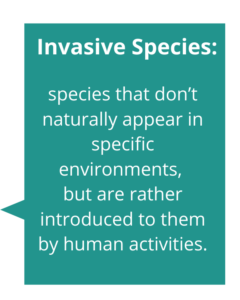 When invasive species are introduced to a new environment, they often do not have any natural predators or competition in the area. This makes it so that they are able to rapidly grow and reproduce while outcompeting other naturally occurring species in the environment. The introduction of invasive species can often lead to a loss of biodiversity, which is a negative characteristic in their new environments.

There are many different species that are known for being successfully invasive, and we even have a variety right here in the Rappahannock River watershed. Some of these species include the tree-of-heaven (Ailanthus altissima), some strands of the common reed (Phragmites australis), and the blue catfish (Ictalurus furcatus). The blue catfish are a well-known invasive species throughout the Chesapeake Bay region, and have spread to almost all of the Bay’s river systems, including the Rappahannock. They are known for eating almost any creatures they can find, which can therefore cause the ecosystem to become unbalanced. The blue catfish are also one of the invasive species that have a few methods beginning to take place for their management.

In some ecosystems invasive species have become overwhelmingly damaging to both the economical  and ecological health of the area. To fix this, communities will find creative ways to fight back – or at least to attempt to manage the invasive populations a little bit better. In the case of the blue catfish, there are a variety of ideas to both learn more about the expansion of the catfish population while managing or reducing it. 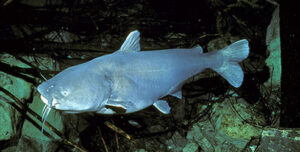 The Coastal Conservation Association of Maryland created one of these management techniques by enacting the Great Chesapeake Invasives Count both in 2020 and 2021. They encouraged anglers to use their app, iAngler Tournament, to keep track of the different fish they caught in certain areas. This helped to provide valuable data on invasive fish species, including the blue catfish. The blue catfish are a species that is often encouraged to catch and eat because of their potential negative effects in the environment as well as their nutritional value. Efforts similar to this, including scheduled fishing tournaments of invasive fish species are also a widely used method to attempt to regulate overbearing populations.

Although invasive species can cause many problems within environments and local economies with their very successful population growth, organizations are attempting to create management strategies moving forward. Even if the species cannot be completely eradicated, certain techniques could help to keep the affected ecosystems within a relatively healthy balance.

reducing their impact. For example. If you are interested in helping manage the blue catfish population, download the IAngler Tournament app. As mentioned before, this app allows anglers to record the fish they catch leading to better data for scientists working to research and solve these problems.

Written by FOR Staff – Jennifer Sagan