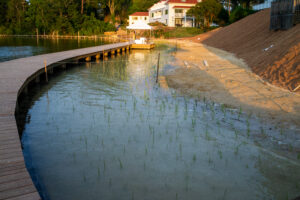 In the last few years coastal flood resilience and climate change adaptation has become an advocacy priority of Friends of the Rappahannock. In Virginia flooding resilience has become a topic of great debate and modest positive action.

Coastal areas, both urban and rural, are experiencing recurrent flooding. According to data from the tide gauge station at Sewells Point sea levels have risen 18 inches in the last century. Multiple studies show increasing precipitation, in both amounts and especially the intensity of precipitation — throughout the commonwealth.  Many localities experience sunny day flooding which result from higher than normal tides. Large rain events overwhelm the ability of infrastructure to handle the deluge of water. No matter the cause these floods are affecting human health and ecological integrity by destroying infrastructure and damaging natural systems.

Damage to infrastructure has cost Virginia billions of dollars. Bridges and roads wash out when culverts fail, buildings are damaged, and agricultural fields are rendered unusable. Septic systems fail and cause sewage to leak into groundwater wells used for drinking and into waterways causing algae blooms and contaminating shellfish beds. Increased flooding has caused FEMA to undertake remapping floodplains. More citizens have their properties placed in floodplains that then force them to buy flood insurance whose premiums are rising, if they are able to afford premiums at all. Properties that are subject to increased  flooding risks can suffer from lower resale value and become totally unsellable.

One of our best defenses against increased flooding is maintaining the resiliency and integrity of our natural ecological systems also known as green infrastructure. FOR believes we must balance the use of green and grey infrastructure (floodwalls, bulkheads, rip rap etc). Tidal wetlands, vegetated buffers, SAV beds, and oyster reefs serve to buffer the shorelines against rising sea levels and increased storm surge. Ensuring tidal wetlands are able to migrate as sea levels rise is important so they do not drown in place. Intact forests and mature tree canopy slow precipitation down before it hits the ground, absorb it before it can run off, and filter it before it reaches our waterways. 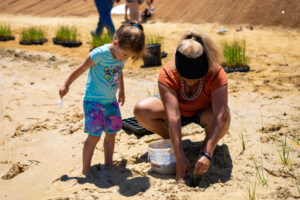 In 2021, FOR worked with partners on amendments to the Chesapeake Bay Preservation Act regulation that address Coastal Resilience and Adaptation to Sea-level Rise and Climate Change and help preserve mature trees. The Virginia Marine Resources Commission also amended their Tidal Wetlands Guidelines to address sea-level rise and climate change. We have provided comment and guidance on the development of the Coastal Resilience Master Plan and grant manual for the Community Flood Protection Fund. FOR has worked with local governments and Planning Districts on resilience planning and has advocated for community meetings to be held in communities identified to most at risk of coastal flooding.