Snakehead numbers appear to be growing in Rappahannock

Dozens were legally killed in Fredericksburg area this spring

Standing on top of a concrete dam at Ficklen Island in downtown Fredericksburg, the archer drew back his bow, took aim, and drove an arrow through his prey – a 30-inch fish that does not belong in the Rappahannock River. 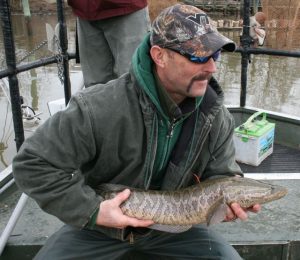 Yes, bow fishing is legal, and in the case of northern snakeheads, it is highly desirable. Stopping the spread of these non-native, potentially invasive fish is a top-priority for the region’s fisheries scientists. This spring, it appears that more snakeheads than ever not only made it to Fredericksburg, but they are also headed farther upstream.

“The idea that we have more snakeheads now in Fredericksburg is probably true,” said John Odenkirk, fisheries biologist with the Virginia Department of Game and Inland Fisheries (VDGIF). “But that’s to be expected. What matters now is that we control their spread as much as possible, including enforcing laws that criminalize introducing them into new river systems, ponds and lakes.”

Snakeheads were first identified in the Rappahannock River system in 2012, said Odenkirk, when they were illegally introduced into Ruffin’s Mill Pond, just south of Fredericksburg. About the same time, snakeheads naturally found their way from the Potomac system, where they had been since 2004, and into the tidal Rappahannock via the Chesapeake Bay.

In recent years, it was possible to find snakeheads downstream of Fredericksburg, but this spring bow fishermen found dozens of them below the concrete dam at Ficklen Island, just upstream from the Route 1 Bridge. Odenkirk wasn’t surprised.

“It’s a seasonal behavior. They have a strong, pre-spawn annual migration and move upstream,” he said. Finding them at the Ficklen Island dam is not unusual, “because they are likely resting in pools amidst the high gradient climb through the fall line.

“We never saw a lot of them in the past,” he said. “Even last year, they were restricted primarily to certain tributaries, mostly below Port Royal. The exception is in April, when they move upstream to spawn.”

Two springs ago, Odenkirk and his staff found one or two snakeheads as far up as Rapidan Mill Dam in Orange County. He said next year even more may make it up past the fall line and into the upper Rappahannock and the Rapidan.

“We expect the snakehead population in the Rappahannock system to mirror what we saw happen in the Potomac system,” he said. “They will likely continue to increase in the Rappahannock for about the next five years, and then we’ll probably see the population start to decline and eventually reach equilibrium.”

Getting to that stable point will be the result of several factors, said Odenkirk, including sport fishing. Snakeheads have an excellent reputation as table fare and can be sold commercially in Maryland and D.C., which can help control their population. However, their economic value is also incentive for illegal activity which is why they are not allowed to be sold in Virginia.

Biologists are concerned that exotic, non-native species like snakeheads can alter natural aquatic systems by feeding on or competing with native and naturalized fishes. They may also transmit parasites and diseases to native wildlife. 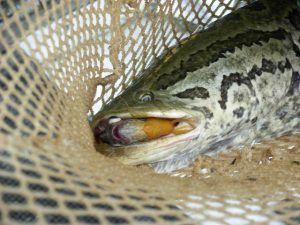 One example of such an impact is the story of the blue catfish, which was originally found in the Mississippi River system. Through legal stocking and other means, blue catfish are taking over in places like the Potomac and James rivers, where as much as 90% of the biomass of all fish was found to be blue cats. They are also a concern in the tidal Rappahannock, where they feed on desirable species like blue crabs. Blue catfish are also prevalent in the fall line area of Fredericksburg. Officials hope to foster the growth of a restaurant market for blue cats, but there is a fish consumption advisory based on PCBs for this and other species that complicates that issue.

A common nickname is “Frankenfish,” because of their large teeth and aggressive feeding habits.

Snakeheads can grow up to 18 pounds and three feet in length. The average snakehead weighs 4-to-6 pounds and is 24 inches long.

Snakeheads are not dangerous to people, but they can be protective of their young. And they have sharp teeth on both jaws and down their throat.

They are somewhat unique in that they can stay alive for several days out of water, as they are obligate air breathers.

What should someone do if they think they’ve found a snakehead fish?

Before going fishing, anglers should familiarize themselves with the fish species found in Virginia. There are several native species including bowfin, lamprey, and American eel that look similar to the northern snakehead. For more information and assistance with learning the identifying differences between snakehead fish and native species, please see our “Do You Know The Difference?” information page. Any unusual fish needs to be reported to the Virginia Department of Game and Inland Fisheries. We have established a snakehead hotline that anglers can use to report snakehead fish (804-367-2925). There is also a new, easy-to-use web application for reporting observations.

Anglers are not required to report snakeheads nor are they required to kill them if caught, but the Department asks that the fish be reported and killed if possible. However, if an angler wishes to keep a legally caught northern snakehead, the fish must be killed to be in possession, and the angler must call the hotline and report the angler’s last name, date of catch, location of catch and size. – from VDGIF