Every year, FOR conducts four bird counts during the summer in partnership with Andrew Dolby, Biology Professor at the University of Mary Washington, and his ornithology students. A small team of students paddles down the river from Mott’s Run to the I-95 bridge and tallies all the bird species seen or heard. The compiled list of birds provides valuable information about the health of the Rappahannock River ecosystem because birds serve as indicator species that can be used to monitor water quality and the health of the riparian buffer. 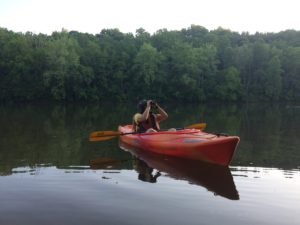 During a typical count, a group starts paddling downstream at 6am, because birds are most active early in the morning, making stops at 400 meter intervals. At each stop, the group records all bird species seen or heard for ten minutes. After all data are collected, the group analyzes the data to determine which points along the river have the highest number of bird species. These results indicate which sections of the river have suitable bird habitat and food sources. “Bird counts are important because they provide another way to monitor the health of the Rappahannock River and the surrounding riparian buffer. A healthy river should support high biological diversity, and birds are an important part of that.” explained Professor Dolby. The data can also be used to understand the correlation between bird species and human land use along the riparian buffer. Development along the forest corridor can negatively affect bird populations and their habitat, so gaining a better understanding of this relationship will be vital for the future of our river ecosystem. 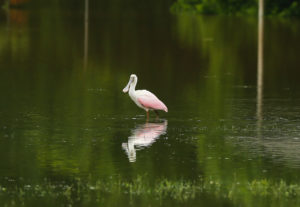 Along with the normal breeding birds found in the area, sometimes unusual bird are seen near the Rappahannock River. Earlier this week, a vagrant juvenile Roseate Spoonbill was spotted at Old Mill Park in Fredericksburg. It was likely swept up from the Gulf Coast by a tropical storm system. Fredericksburg is several hundred miles from its usual range, and only a handful of Roseate Spoonbills have been seen in Virginia. These wading birds are found along the Gulf Coast of North America and in Central and South America. They use their bills to sift through mud for various small amphibians, crustaceans, fish, and insects. We hope this Spoonbill was able to find its way home!