Meddlin’ for mussels in the Carter’s Run watershed

Perhaps you have heard of “noodlin’” for catfish, but you’ve probably never heard of “meddlin’” for mussels. That’s because Galon Hall, biologist for the Natural Resources Conservation Service (NRCS), coined the phrase during a field visit to Fauquier County. 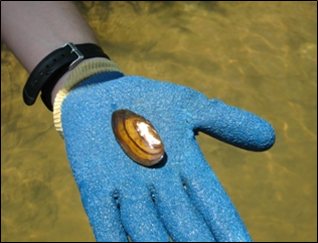 The visit was part of a public/private effort to protect freshwater resources in Fauquier County. As part of this effort, the John Marshall Soil and Water Conservation District (JMSWCD), the Virginia Department of Game and Inland Fisheries (DGIF), and NRCS conducted a survey of potential freshwater mussel habitat in a tributary of Carter’s Run near Marshall.

This survey was done to determine the status of threatened or endangered freshwater mussels in the area, ahead of a planned conservation project, aiming to improve water quality by reducing sediment, bacteria, and nutrient pollution to surface waters. This partnership will protect more than 12,400 feet of streambank by excluding livestock, providing an alternative water source and constructing hardened stream crossing points.

Because Carter’s Run is on Virginia’s Natural Heritage list and state and federal laws require protection for threatened and endangered species, action was needed to determine which species were present and the extent of any possible impacts to them. For this purpose, members of the conservation partnership donned waders, rubber gloves, and “mussel monoculars” (which look like traffic cones with handles and a viewing hole to see clearly into the stream and spot mussels embedded in the bottom).An initial environmental evaluation raised concerns about sediment from the construction of the crossings possibly affecting the mussels during their summer breeding season.

The investigation was continued to the main stem of Carter’s Run, to determine mussel species present ahead of planned future projects in the area. An abundance of Asian clams (Corbicula fluminea) were found, originally brought to the western U.S. in 1924 and spread to the eastern states by 1972.It was determined that the crossing site, as well as most of the tributary, does not hold rare or threatened freshwater mussels, more than likely due to relatively poor habitat conditions. As an extra precaution, it was decided the stream crossing would be completed when the mussels are not reproducing.

The species is the size of a nickel, can be very abundant on sand or gravel substrates and is intolerant of pollution. One Eastern elliptio (Elliptio complanata) was also found, one of the most common and widespread species in the eastern U.S. It is a fairly large species (up to several inches) and can thrive in a variety of different habitats.

The most interesting discovery of the day was the presence of several Yellow Lance mussels (Elliptio lanceolata), a species of concern in Virginia. This mussel is approximately two inches long, yellow with black lengthwise stripes, and prefers clean stream bottoms with coarse to medium-sized sand. On occasion, specimens are also found in gravel substrates. The species is found in the main channels of streams as small as a meter across.

All freshwater mussels are helpful in maintaining water quality due to their ability to filter the water column. An overabundance of sediment and other pollutants can force these mussels out of a stream, negatively affecting the ability of the ecosystem to filter the water. This loss of function can precipitate a further decline in water quality and make cleanup efforts all the more difficult. By encouraging landowners to fence livestock from streams and creating riparian buffers in the process, mussel habitat and water quality can improve. It is our hope that several years from now we will be able to return to the site and again find ourselves “meddlin’ for mussels” that have colonized the newly-protected reaches of this tributary. That would be an experience well worth the wait.