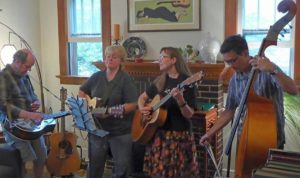 Hazel Run performs Nov. 17 at Gari Melchers Belmont to benefit Friends of the Rappahannock. Belmont is known for its great acoustic qualities.

Many area residents have a close relationship with “their river,” which weaves through nearly every aspect of living in this region. Whether by history, adventure, or the arts, the Rappahannock helps define what it means to live here.

Fredericksburg-based Hazel Run will showcase their love for the river during a Nov. 17 benefit concert for Friends of the Rappahannock (FOR) at Gari Melchers Home and Studio, “Belmont.”

“This event brings together great music, beautiful art, and our community in partnership for the Rappahannock River,” said FOR Executive Director Kathleen Harrigan. “I’ve heard Hazel Run perform in living rooms, coffee shops, and on the library steps, but this will be special, in a true ‘listening’ room, with their wonderful harmonies and music in a setting overlooking the river.”

Band members Stuart Whitford, Linda LaFave, Stephen Hu, and Karen Richardson have been playing together for about two years. Influenced by singer-songwriters from across the spectrum, Hazel Run is reminiscent of Crosby, Stills, Nash & Young, and influenced by contemporary artists like The Wailin’ Jennys, and Patty Griffin.

Each member of Hazel Run is a multi-instrumentalist, and the among the band’s most distinctive qualities are its vocal harmonies. Their set list includes several songs about waterways, including one Richardson wrote, called “River Song.”

Richardson, an avid paddler, is often found on the water in one of her kayaks, especially when there’s a full moon. Her “River Song” begins with, “Where I like to go is on that river so slow, and travel with the night. Where I want to be is on that river, where my troubles one-by-one fall away from me.” It’s a heartfelt song, with Whitford’s nuanced mandolin work accenting the melody.

“That’s my favorite river song,” said LaFave, also a paddler. “I have so many fond Rappahannock memories. One is playing music with friends, all of us in canoes or kayaks watching the sun set, and the moon rise, and then paddling back in the dark.” 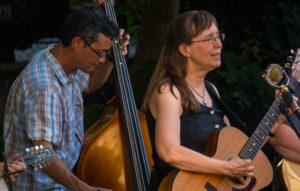 Hu recalled tubing the river with FredCamp, a local non-profit, as a favorite river memory. Whitford wrote an instrumental, “Riverboat Pete,” about a riverboat that turned around just below his house, on its journeys to-and-from Fredericksburg.

Whitford lived on a bluff overlooking the river for 21 years, in the River Bend community of Stafford County. “I will always remember the first time we saw numerous campfires on the other side of the river in Caroline County, during the shad run in the spring of 1984,” he said. “It was an awesome sight.” 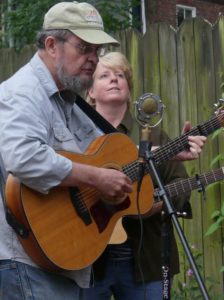 “We’re very happy to play this benefit and raise money for the river,” said Richardson. “It means something special to each of us.”

Tickets and sponsorship information for An Evening with Hazel Run are on sale now. VIP tickets are available and include early admission to the Gari Melchers Studio.