FOR’s mission is to be the voice and active force for a healthy and scenic Rappahannock River. Our restoration team and dedicated volunteers are in and around streams and river year-round from the Blue Ridge to the Bay, planting tree buffers, sticking live stakes into streambanks, and installing green infrastructure. One key tool in our toolkit is riparian restoration. Luckily for us, the single most cost-effective way to improve water quality is something anyone can do: plant trees along stream and rivers. That’s the goal of our Headwaters Stream Initiative, which aims to establish riparian buffers in our upper watershed. We often take it for granted that planting trees helps clean our environment. So how exactly do forest buffers along tributaries help clean the water in the Rappahannock River?

The most important water quality benefit that riparian buffers provide is encouraging precipitation to infiltrate groundwater rather than running off. The more surface water that infiltrates, the better the water quality downstream will be. Think about it: most people wouldn’t drink water out of a puddle, but would have no problem drinking straight from an untreated well. When surface water infiltrates the ground, the earth acts like a big filter and cleanses the water of contaminants as it seeps through layers of porous rock. When that groundwater eventually re-joins a river like the Rappahannock, by way of a spring, it is much cleaner than it was when it entered the ground. On the other hand, water that is unable to permeate the earth turns into runoff, which becomes a vehicle for surface contaminants to enter rivers and streams. 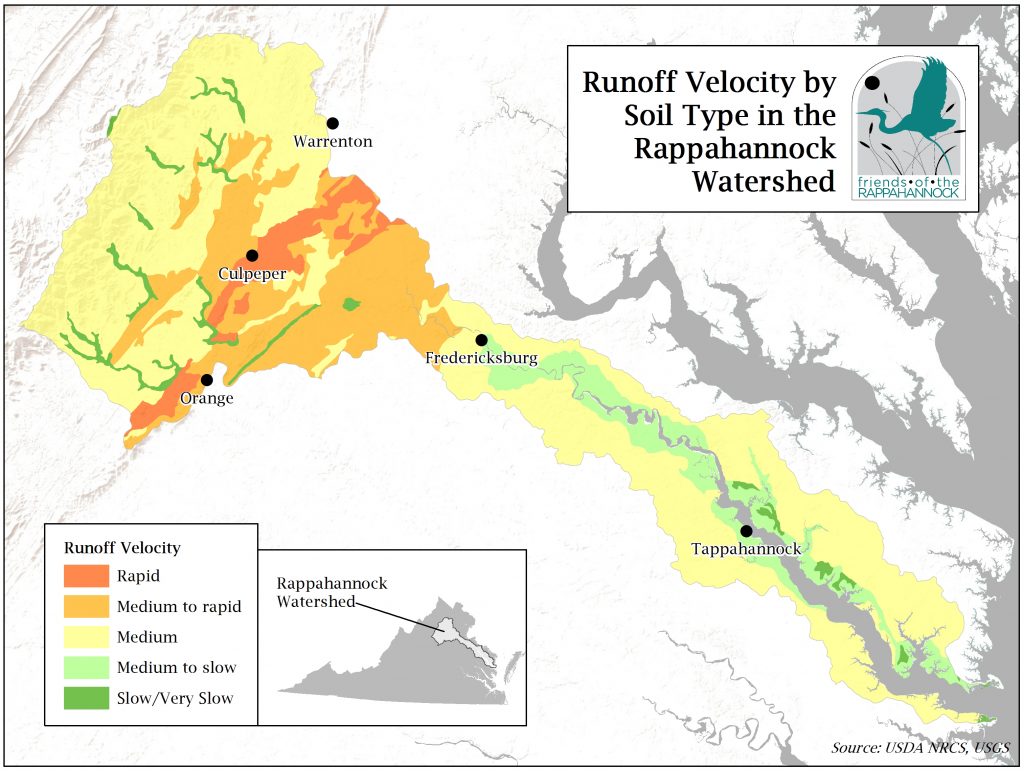 But how do riparian buffers actually encourage infiltration? Imagine a scenario where one bank of a river is covered in a layer of bricks, while the opposite bank is coated in sponges. When it rains, which side will allow more runoff into the river? The soil in a mature riparian buffer is topped with a layer of organic matter called humus, formed from decaying leaf litter, which acts like a big sponge that holds precipitation in place until it can safely infiltrate into the ground. A non-forested bank acts like a brick sidewalk and channels the precipitation into the river before it has a chance to enter the earth.

In much of our upland watershed, non-forested streambanks act like brick sidewalks because of their dense red clay soils. Clay soils are composed of very fine particles and, unlike sandy soils, they contain few spaces for rainwater to percolate. When clay soils aren’t topped with a layer of humus to slow runoff, precipitation runs off them quickly (see map) and is more likely to reach surface water before it has a chance to infiltrate. Steep slopes such as those found in the Blue Ridge foothills can exacerbate runoff rates.