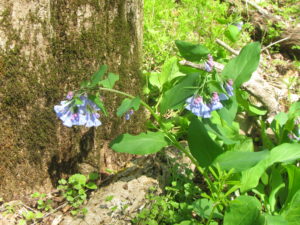 Invasive plant species aggressively compete with native plant species often choking them out of existence. During Friends of the Rappahannock (FOR)’s 32 year history, several attempts have been made to combat the ever-present invasive plants on the property. Since FOR reaches over 6,000 students each year, about 5,000 for field trips directly on our 17-acre nature preserve, we have the unique opportunity to introduce a large number of young Virginians to their natural heritage of vernal bloomers.

Every spring Mabe’s Trail on FOR property hosts a brilliant show of early spring blooming native species: Virginia Bluebell (Mertensia virginica), Virginia Spiderwort (Tradescantia virginiana), Common Jack-in-the-pulpit (Arisaema triphyllum), Spring Beauty (Claytonia virginica), Mayapple (Podophyllum peltatum), and Dutchman’s Breeches (Dicentra cucullaria) to name only a few. FOR Educators are proud to introduce our young visitors to the native bloomers during their field trips. By partnering with the Central Rappahannock Chapter of Virginia Master Naturalists, FOR has partnered with a knowledge-seeking corp of volunteers eager to preserve native species while learning how to combat invasive plants. 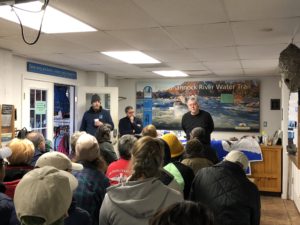 Our defense against the invasive plant species featured three key people: Nick Cadwallender, FOR educator and development director; Hal Wiggins, retired environmental scientist with the U.S. Army Corps of Engineers and lifelong naturalist; and Brent Hunsinger, FOR educator and owner of Brent’s Native Plantings. Nick researched the best approaches to eradicating invasive species through contacts with Blue Ridge PRISM and past members of the Virginia Native Plant Society. Hal delivered an informative pre-work talk on the history of Mabe’s Trail and an overview of vernal bloomers and most aggressive invasive species present on FOR property. Hunsinger instructed volunteers on the most effective methods to rid a predefined area of Japanese Honeysuckle. Together they detailed an educational talk for volunteers and defined the 1/10 of an acre in which to begin our eradication of invasive species along the most used field trip paths on Friends of the Rappahannock. 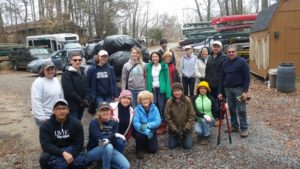 The Friends of the Rappahannock property is at the heart of Fredericksburg in an urban setting adjacent to the Rappahannock River. The low-lying woodland area is an ideal spot for Virginia vernal bloomers but also for the aggressive invasive species. Enough Japanese Honeysuckle was introduced in flower gardens years ago to create thick walls of vines throughout this urban area. Wiggins sees this eradication project as important because it “makes room for native plants to prosper on this property in an urban environment. The Japanese Honeysuckle, although non-native and non-parasitic is becoming naturalized and already out-competes the native plants in this area.”

Although chickweed also grows in our first target area, Hunsinger identified Japanese Honeysuckle to be our primary target on our first workday. Invasive species often green up earlier than the native species, which not only give them their advantage but also assists in their eradication. We only had to search for the thin vines already adorned with green foliage. Hunsinger showed us how to identify the Japanese Honeysuckle vine then follow it to its roots, pulling as we walked. The moist earth made this task very easy and quite satisfying. By the end of the 2-hour time block with 32 volunteers, we filled 20 huge leaf bags of honeysuckle and over flowed Brent’s truck. We had to take the bagged up invasives to the dump on a large trailer. (Don’t worry. That’s legal and proper procedure.)

Both side of the partnership between the Central Rappahannock Chapter of Virginia Master Naturalist and Friends of the Rappahannock consider this an excellent start to an on-going project. FOR invited back all of our 32 volunteers to view the vernal bloomers along Mabe’s Trail. 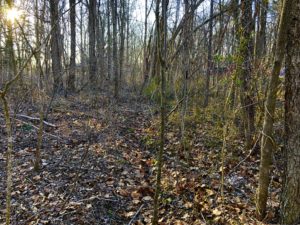 They should be making their appearance in early to mid-April. While we only eradicated one invasive plant species on one tenth of an acre of FOR’s 17-acre property, we are reminded that Rome was not built in a day. However, like the Roman Empire, great partnerships accomplish lasting cultural benefits. We are planning more work days, each one with an educational component. Please consider joining FOR and the Virginia Master Naturalist along the banks of the Rappahannock River for our next invasive species eradication day.

The River Within Us: An evening variety performance