ChesBay Report Card: The Rappahannock’s grade tanked in 2019. Here are four lessons we can learn from this.

The University of Maryland’s newly published 2019 Chesapeake Bay Report Card found that the water quality in the Rappahannock River fell significantly between 2018 and 2019, from a C grade to a D, based on 7 indicators of water quality. 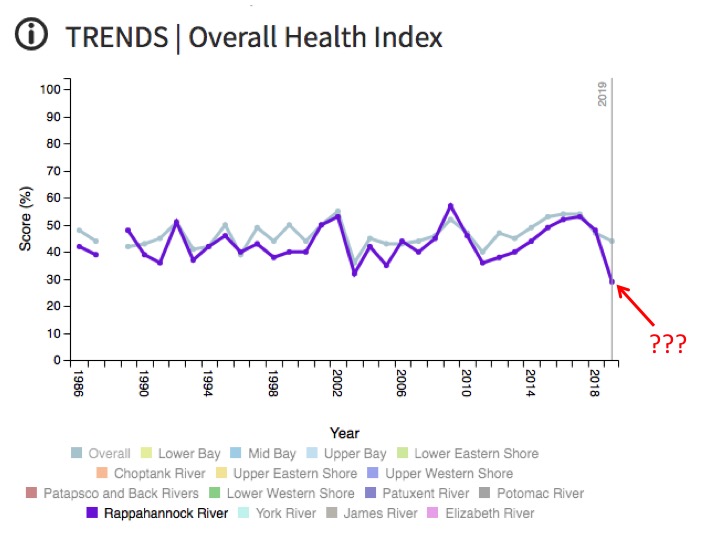 The Rappahannock River (purple line) saw its overall health index fall from a 48 to a 29 in 2019. The Chesapeake Bay’s overall score is shown in light blue. Source: Chesapeake Bay Report Card.

It’s hard to sugar coat this. The 2019 grade (a 29 out of 100) is the lowest grade the Rappahannock has earned since the “ChesBay” Report Card began in 1986. The 19-point one-year drop was the largest loss among the 15 Bay tributaries that were assessed in 2019.

If the Rappahannock River were a student, these grades would merit a meeting with a parent or a trip to the principal’s office. So Friends of the Rappahannock crunched the numbers and came up with 4 lessons about what this means for our river– and how we can turn it around.

An important disclaimer: Understanding the ups and downs of the Chesapeake Bay ecosystem is extremely difficult, even for the best scientists. This report card was based on a scoring protocol that only assessed the tidal portion of the rivers under consideration.The Tidal Rappahannock River is best understood as an arm of the Chesapeake Bay. And the Bay’s location between two dynamic systems (freshwater rivers and the Atlantic Ocean) makes it a volatile environment full of interdependencies and naturally prone to boom-bust cycles. With that in mind, we’ll focus on a few of the things we know for sure.

The biggest loser in the Rappahannock’s 2019 report card was aquatic habitat. Declines were steepest in two indicators, aquatic grasses and benthic (stream-bottom) communities. Aquatic grass and healthy stream-bottom habitat are critical for organisms like oysters, fish, crab, and the invertebrates that form the foundation of the river food chain. When they go away, the food chain erodes from the bottom up. So let’s dig down one more level to look at what caused last year’s drop.

2. You can’t predict the weather

Precipitation and temperature are the two main triggers for the 2019 decline. In 2018, the Chesapeake Bay watershed, and Virginia in particular, experienced historic precipitation levels including a state-record 94 inches in Sperryville, VA. Rainy years are hard on rivers. Soft, wet soils are more susceptible to erosion and sedimentation and result in more pollutants in the water.  High rainfall also lowers salinity in brackish water, affecting organisms like oysters that need saltier water to live and reproduce. Second, heat stresses aquatic ecosystems, in large part because warmer water holds less oxygen than cooler water. Last year was the second hottest global year on record and a very hot year for the southeastern U.S. It set statewide air temperature records for nearby states including North Carolina and Georgia. 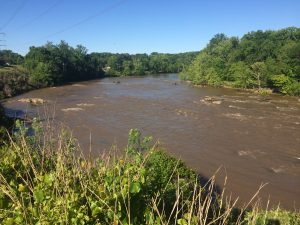 Muddy water is the sign of a sick river

Together, the high rainfall of 2018 and the extreme heat of 2019 were a devastating one-two punch for the Rappahannock. The floods of 2018 dislodged pollutants and eroded sediment from the land into the water, overloading the river with contaminants, smothering subsurface habitat and making the water unusually fresh. When the heat wave of 2019 arrived, it met an ecosystem that was already stressed—and that took a major toll on our river.

3. The Rappahannock is a fragile river.

Considering these factors, some loss of aquatic habitat in 2019 was unsurprising and even natural. What is surprising was how poorly the Rappahannock fared compared to other Chesapeake Bay tributaries. While the Chesapeake Bay’s overall grade fell by 3 points, the Rappahannock’s score fell by 19. Our three closest rivers (the James, York, and Potomac) all saw their overall scores go up slightly in 2019. Why did our river fall so hard compared to other rivers facing similar stressors?

In short, the Rappahannock’s setback in water quality is a sign of a fragile river.

While resilient rivers are well equipped to handle high rainfall and heat, fragile rivers collapse under similar stressors. The Rappahannock is a fragile river because humans have removed much of the natural infrastructure that defends it against adverse conditions. Widespread replacement of native forests with agriculture has accelerated erosion and sedimentation, left our streams baking in the sun, and contaminated our water with fertilizer and other pollutants. Meanwhile, our fastest-growing threat is expanding development in our urban and suburban areas, whose pavement, roofs and manicured turf hamper natural groundwater infiltration and accelerate the movement of stormwater runoff into local creeks.

4. Cleaning up the Rappahannock means making it more resilient

To restore the Rappahannock River to a healthier condition, we must understand what makes a river system resilient. In a resilient river system, forests and wetlands along streams and shorelines form a protective barrier that reduces erosion, absorbs pollutants, shades the water and encourages groundwater infiltration. Robust populations of filter feeders like oysters and mussels digest pollutants and suspended particles, keeping the water clear, while abundant aquatic grasses create oxygen and provide habitat for fish and other wildlife. The river system works together to maintain stability and balance, which defends it against adverse conditions like high rainfall and heat. 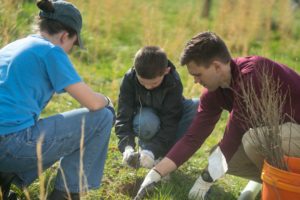 At Friends of the Rappahannock we are working across the Rappahannock watershed to create a more resilient river. Our riparian buffer program uses local volunteers to establish forest buffers along streams and rivers on agricultural lands. Our free tree program aims to manage stormwater by reforesting our urban and suburban landscapes in populated areas. Our oyster restoration program establishes and nourishes oyster populations so they can filter pollutants and feed our communities. Our education program trains thousands of local students and teachers every year to become better river stewards. And our advocacy program fights for river-friendly policies.

The Rappahannock has a long way to go before we become an “A” river. But Friends of the Rappahannock is committed to leading our community toward this important goal. Are you with us?

There are no upcoming events at this time.