The press release sounded like a hopeful herald of the new year — “Chesapeake Bay Health Improves.” I, for one, filled in imaginary exclamation points when I read the headline.

The fine print of the January 2 release of Chesapeake Bay Foundation’s (CBF) annual Bay health scorecard told a slightly different story: the score at the end of 2012 stood just one point higher than the 2010 assessment, earning a 32 out of 100 or a “D+” grade– still a long way from a really healthy ecosystem.

Nonetheless, the score does mark a slow but steady improvement of four points since 2008. On a scale where 100 represents a pristine condition such as that encountered by the first European settlers, and 70 represents a victory in estuarine recovery, the good news is that we are making progress. That is actually rather remarkable, given the continually increasing population pressure in the region and the budgetary difficulties of the past several years, due to the great recession. The bad news is that, at the rate we are going, few of us current Friends of the Rappahannock may live to see the day the Bay is recovered.

CBF rates the health of the Bay on five metrics of water quality, four of habitat quality, and four of fisheries health. The worst rankings overall come in the pollution metrics: F scores for nitrogen and water clarity, and Ds for phosphorus, dissolved oxygen, and toxics. The phosphorus and dissolved oxygen scores improved 4 and 6 points over 2010, respectively. The improvement in the oxygen score reflects the fact that the annual summer “dead zone” (the area of critically low oxygen caused by pollutant-fed algal blooms) in 2012 was the second-smallest on record since 1985. That is a pretty hopeful sign that pollution reduction strategies are beginning to work.

The habitat metrics fared slightly better than the pollution metrics, in that none had a failing grade: forested buffers scored a B+, wetlands a C+, land use a D+, and submerged aquatic vegetation barely “passing” with a D-. Scores for buffers and wetlands were unchanged from 2010, while land use ticked up a point and submerged vegetation down two, reflecting the ongoing challenge of maintaining a habitat type that depends upon unimpaired water quality and clarity. This was, however, the only indicator that worsened from the last assessment.

The fisheries metrics showed the starkest variance of the three groups– rockfish received an A, with stocks above management targets, and blue crabs a B+, with strong reproduction numbers in recent years, but adult numbers were still below desired levels. On the other hand, oysters and shad scored worst among all the indicators — F grades with abyssmal single-digit scores. Even for these, though, there is cause for hope: the intensive efforts to recover oysters seem to be bearing fruit, with indications of good reproduction in recent years, indicating that recovery might finally be within reach. Meanwhile, the condition of the shad stock may force closure of the fishery in 2013, which could give that species the chance to recover.

The State of the Bay report is available at www.cbf.org/stateofthebay. 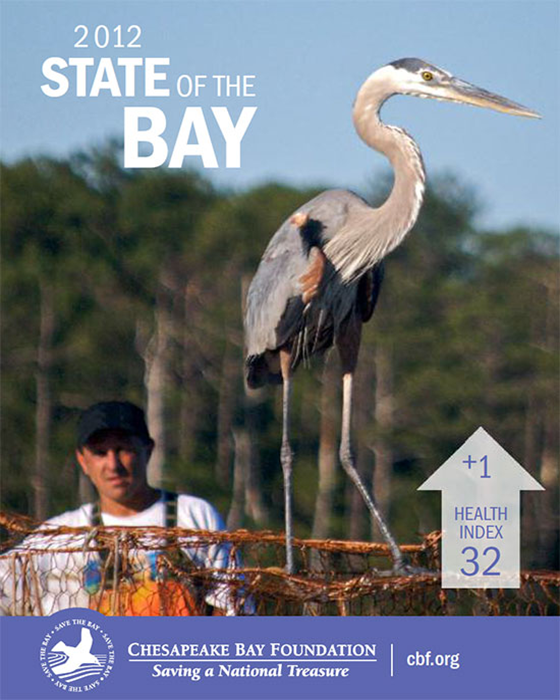