Be on the lookout for a living fossil

Kayakers, canoers, tubers, fishermen, and other riverrats, this April through June be on the lookout for soundings from the Atlantic and Shortnose sturgeon during your adventures along the Rappahannock River. A sounding is when a sturgeon jumps out of the water on their journey upstream. These fish are anadromous, meaning that as an adult they spend their time in the ocean and they swim upstream to spawn and lay their eggs. According to the Chesapeake Bay Program, juveniles can stay in their natal (home) stream up to six years before making their way to the ocean.

Sturgeon are the largest native fish species to the Chesapeake Bay and have been found in the fossil record for over 85 million years. Sturgeon have overcome many obstacles, but the current question is can they overcome human destruction? Historically, the Chesapeake Bay was known to house hundreds of Atlantic and Shortnose sturgeon. It was once said, that you could cross the James Rivers on the backs of sturgeons. Today sturgeon face many threats. According to National Oceanic and Atmospheric Administration (NOAA) those threats include being caught as bycatch, dams blocking spawning grounds, tidal turbines, boat strikes, dredging, and pollution. Sturgeon are highly sensitive to low dissolved oxygen and other poor water quality conditions.

According to Matthew Fisher, a Marine Researcher at Virginia Institute of Marine Science (VIMS), in 2015 there were three sturgeon detected by receivers set up by VIMS in the Rappahannock River. Each sturgeon was tagged by a different research team, VIMS, Virginia Commonwealth University (VCU), and the U.S. Navy, showing that the sturgeon’s return must be a group effort. Fisher said, “VIMS has eight receivers deployed from the mouth of the Rappahannock to the Four Winds community at river kilometer 129.”

Researchers are still gathering data by tagging sturgeon throughout the Chesapeake Bay. Matt Balazik, a Ph.D. student at VCU, said, “I tagged an adult male last fall that was ready to spawn,” about his fall 2015 tagging experience along the Rappahannock River.

You can help through citizen science in two ways. The first way you can help sturgeon researchers is, if you see a sounding, sometimes called a breaching, report it to VIMS at their website http://www.vims.edu/research/topics/sturgeon/breaching/index.php. The second way to assist these researchers is to report a dead sturgeon, in Virginia, to VCU- Center for Environmental Studies by calling 804-828-7202.

Taylor McConnell is a senior majoring in Biology and Environmental Studies at UMW. 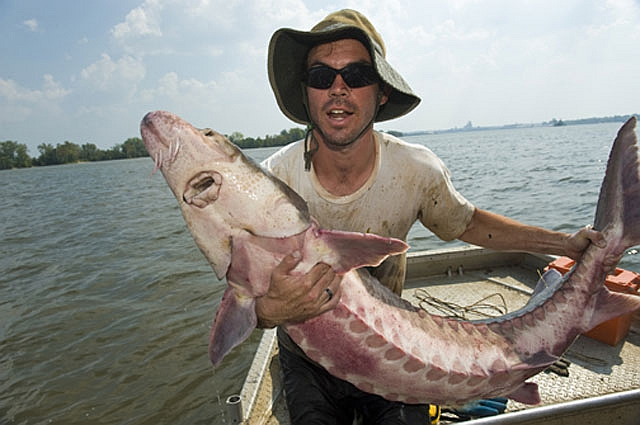